I finished my final essay for Expansion of Europe on Sunday night. Well, I suppose I didn't finish it on Sunday night, seeing how I fell asleep on my keyboard at some point and woke up at 9 in the morning, halfway through the class in which it was due. Crudmuffins, as Josh would say. Thankfully, being a consistently good student tends to pay off, and the teacher was fine with me showing up late and turning in the finished paper after class.
Expansion of Europe class status: One class left, final essay debacle narrowly avoided, drinks all around!

I then went on to spend the remainder of my day studying for my Illuminated Manuscripts final with Mary, which was oddly relaxing. I'm quite sure I did well on the exam itself (any in-class essay that entails me rambling on about the Luttrell psalter is a good in-class essay), but talking with the teacher after class made me realize just how much I was going to miss sitting and staring at slides for three hours each Monday night. I'm going to go in to withdrawl, I know I am.
Illuminated Manuscripts class status: Regrettably finished, grade on final pending.

Aaand finally, 2D... Ooooh, 2D, you scoundrel you. I finished my huge self portrait by 6:30 this morning, aided by episodes of Stargate Atlantis being played while I worked. Carson & Rodney = best ambient sound EVAR, although it now means that huge sections of my painting remind me of particular episodes. Curious. Sadly, in continuing with the trend set by my EofE essay, I decided to cling to whatever time I had left for sleep and ended up waking up at 10:30 when my friend Katie called me from class. Being a consistently good student again saved my ass, although this time in conjunction with the fact that I participated vigorously in the class' critique. I was exhausted by 5, yes, but one out of my three studios is officially over and done with. Life is good. :)

In terms of the painting itself, I'm oddly satisfied with the chest and upper arm area, but I still want to work the painting a good lot more before I can consider it finished:

(See? My collar bone reminds me of Oma Desala, and the hair is Dr. Weir meeting with the ancients.) Anyway, I like parts of it, but only parts. We'll see.

In other news, another one of my paintings was put in an exhibit in Waterman building. I only realized this when people walked up to me and said "Oh, Claire, I saw your pony!" or "I like your pony!" or something along those lines, leading me to believe that I must have gone out with friends the previous night and bought myself an Andalusian in some drunken stupor. I eventually realized that they meant my undead My Little Pony painting, which made much more sense: 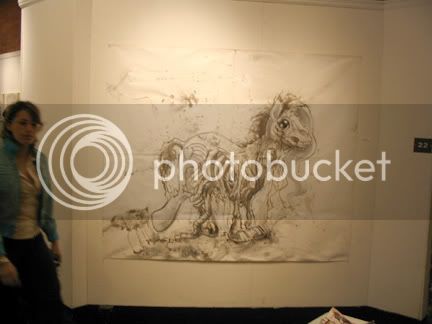 ...Although I don't consider that painting to be finished, either. Ah well.

Tomorrow will be a wonderful day, as I'm dressing up in my Grand Moff Tarkin shirt and my freshly-decorated pants to run off and see the midnight showing of Episode III with a large group of friends. I don't really know how this is going to work in the end, as the time-tested tradition of Hanging Out In Line For Hours On End which is so prevalent back in California is totally lost on everyone from the east coast, all of whom seem to think I'm insane.

I'm going to go and finish bleaching the Rebel Alliance insignia onto my back pocket, as the Imperial one turned out much more distinctly. And then sleep. Mm.

Oooh, Neopets is coming out with a plush based on the baby Kougra I designed however many years ago: